Published:
Please welcome Bec McMaster to The Qwillery with an excerpt from Forged by Desire, the 4th novel in the London Steampunk series. 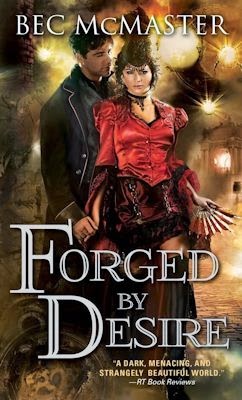 It all starts with a dare.

Garrett Reed, Master of the Nighthawks Guild of thief-catchers, has always equated his partner, Perry, with breeches. For a man who knows women through-and-through, he rarely thinks of her as feminine. And when a case requires Perry to go undercover in a gorgeous red dress, Garrett cannot even imagine his friend pulling it off. Perry? In a dress? The idea is utterly ludicrous.

For Perry, who's been half in love with him for years, Garrett's laughter is like a red flag to a bull. She'll show him - and then the joke will be on him. The problem is, she never expected it to change matters between them forever...

Here's a little excerpt from Forged By Desire, following that life-changing mission:

Garrett closed the black lacquered door to the steam carriage as he stepped down. Perry had swept her driving goggles up on top of her head, the glossy black strands of her hair tumbling in disarray. Cursing under her breath, she pulled the lever that shut off the oxygen valve to the boilers and waited for the steam carriage to hiss itself into a whispered death. Little half-moons of soot stained her cheeks, a sight that almost brought a smile to his face.
She didn’t look at him. She hadn’t in over a month, not directly. As though looking at him meant she too would have to confront what had happened at the opera. The turning point in both their lives.
A sudden reckless frustration swept through him. “Here,” he said, stepping forward and offering her his arm to help her down.
“You’ve never helped me down before,” Perry said with a sudden scowl. “I know you’re struggling to reconcile the fact that I’m actually female, but that doesn’t suddenly make me useless. Just because I wore a dress, it doesn’t change anything.”
Swinging her legs off the driver’s seat, she slid down into the spare few inches between his body and the carriage. For a moment Garrett was tempted to step back, give her space.
Instead he stilled.
Perry realized only too late, freezing in place as she brushed her gloves off against her tight leather breeches. Slowly she lifted her head, gaslight catching the gleaming gray of her eyes. There was an inch between them at most. A single tantalizing inch that he was too aware of.
“It’s difficult to stop picturing you in that dress,” he replied, forcing his voice to stay soft. He could almost feel the heat of the hunger swimming through his eyes, threatening to drop him over the edge. “Considering how much of you it flaunted.”
“You can’t help yourself, can you? I never should have worn the dratted thing.”
Reaching up, his gloved fingers swept at the sooty rings her goggles had left on her cheeks. The motion soothed some part of him. Maybe this was what he needed. Something to ground him. “I said that you could never pass as a female and you wanted to throw my words back in my face. You succeeded. Admirably.”
Twirling at the bottom of the stairs, the red skirts sweeping around her and the thick, luscious curls of her wig trailing over her shoulder as she shot him such a direct look he could hardly breathe all of a sudden… “Well?” she’d challenged.
That moment. The moment it all changed. Like some enormous hand reached out and closed its fingers around his heart and lungs, squeezing, forcing the breath out of him.
Garrett didn’t know how to react now. Perry had recovered flawlessly, resuming her aloof, taciturn persona as though nothing remotely unusual had occurred that night. Gone was the practiced flirtation, the smiles that lit her from within… But he couldn’t forget them. How did you forget something like that? Pretend it had never happened? Pretend that his eye wasn’t drawn to her now, in a way that was distinctly masculine and not at all friend-like?
The problem was that he now knew a sensual woman existed beneath her logical, focused exterior. If she were any other woman, he would have pursued her relentlessly until he had what he wanted. But this was Perry. Someone he admired, respected, someone he’d give his life for. To cross that line meant their entire friendship - which was evolving, admittedly - would change. And then? He didn’t have a bloody clue what that would mean. But he knew it meant more than sex, more than friendship. Perry deserved nothing less - he just wasn’t certain he could give her what she wanted.
“You enjoyed making me act like a fool,” Garrett murmured. “Don’t even try to deny it. And now you have to deal with the consequences.”
Her eyes suddenly gleamed. “You’re right. I did enjoy making a fool of you. The problem is, that I only ever intended for you to act a fool for one night. Not this whole bleeding month.”
Sliding past him, leaving behind the ghostly fragrance she washed her clothes in, Perry strode toward the factory. A FEAR SHE CAN’T ESCAPE
Ten years ago, Perry fled her thrall contract to find sanctuary among the Nighthawks. In that time, she’s become a respected woman of the Guard, and she’s wanted Garrett Reed for as long as she can remember. But when a new case takes a chillingly familiar turn, Perry finds herself once again in the path of a madman…only this time, there’s nowhere left to run.

A DESIRE THAT CAN’T BE TEMPERED
Out of their depth and racing against time, Perry and Garrett must learn to trust the desire sparking between them…or risk losing themselves forever to the darkness stalking London’s streets.

And there is a prequel novella to Forged by Desire. It's free until the end of September! 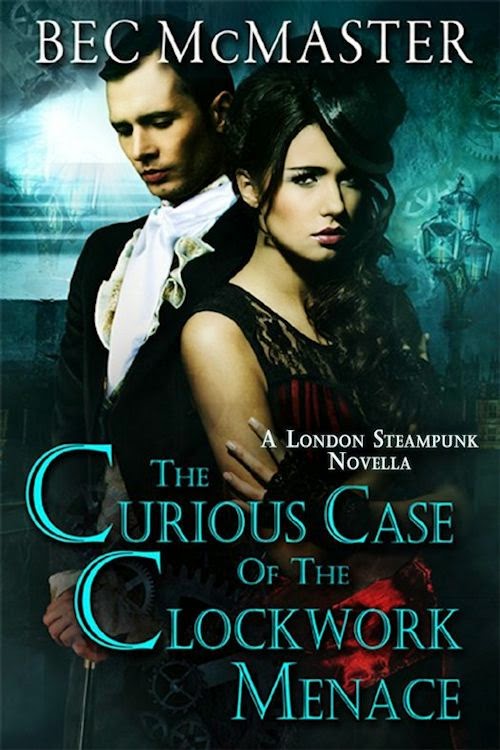 Friends, partners, and professionals. So just why is this case coming between them?

In a Victorian London ruled by the blood-drinking elite, Perry Lowell is a logical and accomplished Nighthawk: a rogue blue blood who tracks murderers and thieves for the Guild. So when she and her charming-but-reckless partner, Garrett, are charged with finding a missing theatre starlet, it should be a simple solve.

But with an entire theatre of suspects, including a flirtatious understudy and whispers of a Clockwork Menace haunting the place, tension is brewing between the pair of them. Can they come together to solve the case - or will it be too late, when the murderer turns his gaze on Perry herself?

Warning: This is not a complete HEA. It's a pre-romance novella featuring the couple who will find their HEA in Forged By Desire (available Sept 2014). Heads will butt, tempers will flare - and perhaps one of them might come to realise just what the other truly means to them? 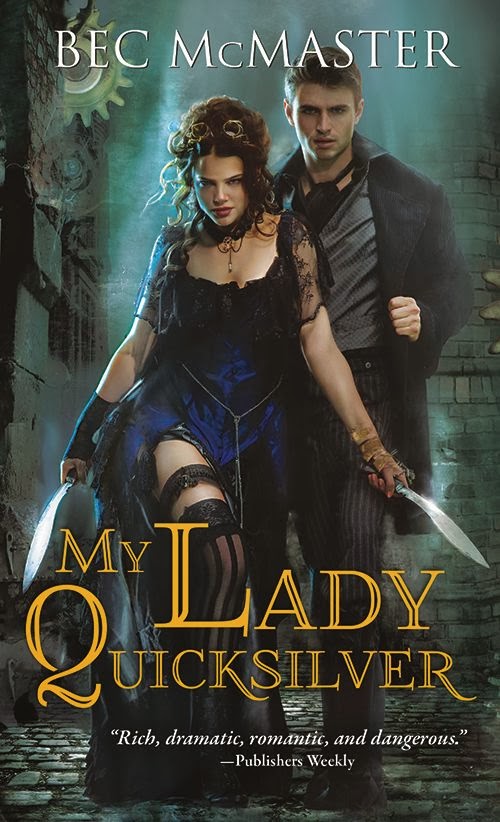 In the mist-shrouded streets of a steam-fueled London, a clockwork army is on the rise, vampire blue bloods rule the streets, and war is brewing...

He will find her no matter what. As a blue-blooded captain of the Nighthawk Guard, his senses are keener than most. Some think he's indestructible. But once he finds the elusive Mercury, what will he do with her?

It's his duty to turn her in—she's a notorious spy and traitor. But after one stolen moment, he can't forget the feel of her in his arms, the taste of her, or the sharp sting of betrayal as she slipped off into the night. Little does Mercury know, no one hunts better than the Nighthawk. And his greatest revenge will be to leave her begging for his touch... 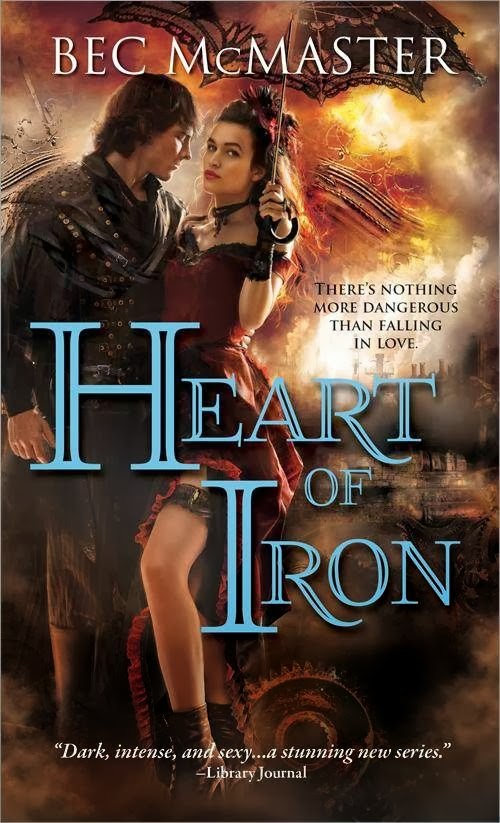 In the mist-shrouded streets of London’s dreaded Whitechapel district, werewolves, vampires and a clockwork army are one step away from battle…

No One to Trust

Dangerous. Unpredictable. That's how people know the hulking Will Carver. And those who don't like pretty words just call him The Beat. No matter how hard Will works to suppress his werewulfen side, certain things drive him beyond all control. And saucy Miss Lena Todd tops the list.

Lena makes the perfect spy against the ruling Echelon blue bloods. No one suspects that under the appearance of flirtatious debutante lies a heart of iron. Not even the ruthless Will Carver, the one man she can't wrap around her finger and the one man whose kiss she can never forget. He's supposed to be protecting her, but he might just be her biggest threat yet... 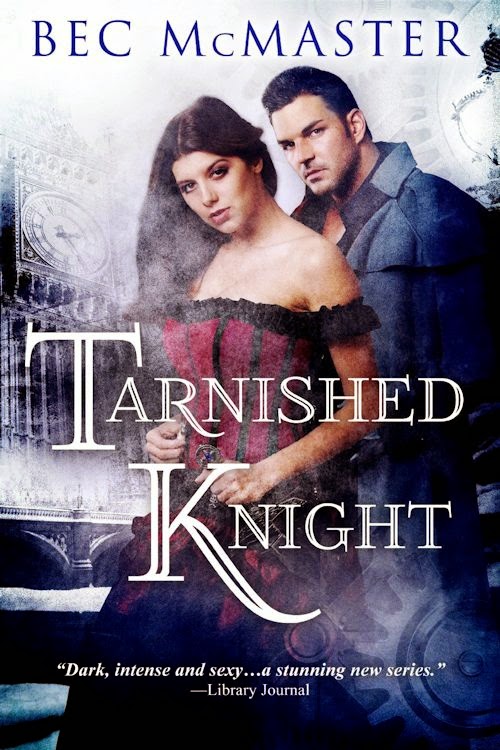 In the steam-fuelled world of Victorian London, vampires, werewolves and slasher gangs stalk the night and a man made partly of metal is about to discover just how far he’ll go to protect the woman he loves…

After a vicious vampire attack left him struggling to leash the dark urges of the craving virus, John ‘Rip’ Doolan, thinks he’s finally starting to master the darkness within. The only thing that threatens to shatter his hard-won control is Esme, his closest friend and the only woman he’s ever wanted. If the stubborn beauty ever realised precisely what was going through his mind, their friendship would be ruined…

For six months Esme has waited for Rip to recover and take her as his thrall, not daring to hope for more. Too afraid to put her heart on the line, she’s devastated when Rip reveals that he never had any intentions of making her his.

But when a savage gang of Slashers start causing havoc in Whitechapel, Rip and Esme have no choice. They must face up to the depth of the passion that burns between them and forge a new relationship… or risk losing each other forever. 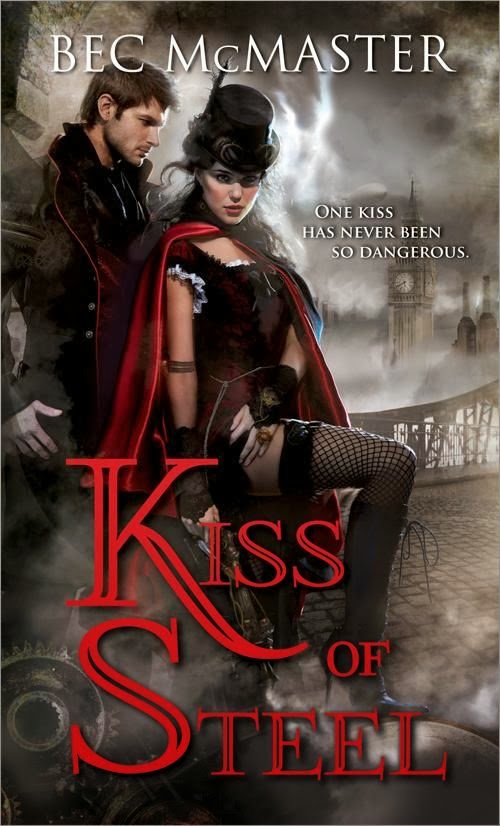 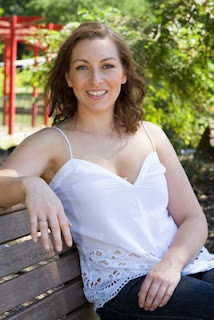 Award-winning author Bec McMaster lives in a small town in Australia and grew up with her nose in a book. A member of RWA, she writes sexy, dark paranormals and steampunk romance. When not writing, reading, or poring over travel brochures, she loves spending time with her very own hero or daydreaming about new worlds. Read more about her at www.becmcmaster.com or follow her on Twitter, @BecMcMaster.