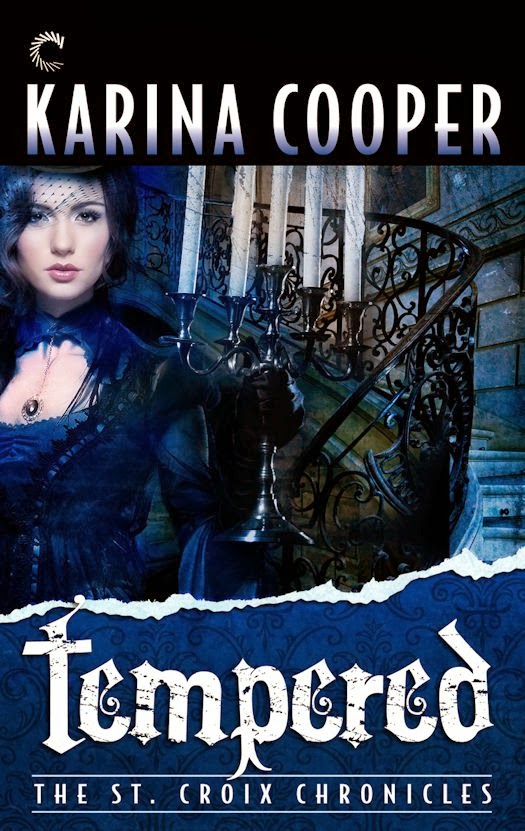 Forced out of London's coal-blackened streets, Cherry St. Croix is faced with her most difficult undertaking yet: sobriety.

At long last, my guardian, the enigmatic Mr. Oliver Ashmore, has revealed himself-and his order is clear: I am to be dried out at once, regardless of my wishes.

I loathe the country estate I am imprisoned within. Footsteps follow me, voices call for me, and my sanity wavers. In my fevered dreams, I am haunted by those I failed, while waking proves no protection from the ghosts of my reckless past. The craving for laudanum plagues me. I require a distraction.

To unravel the alchemical mysteries of my mother's family, I must rely on Ashmore's tutelage. I am lured to the art and drawn by the secrets my guardian possesses. Yet the deeper I delve, the more I believe that something dreadful disturbs these haunted corridors. In my madness, I fear that what it wants most...is me.

*This review contains spoilers*
Tempered is the fourth instalment of the Cherry St. Croix Chronicles and starts immediately after book 3, Corroded. Cherry has been rescued from The Menagerie by her guardian, Oliver Ashmore. He is taking her to the family estate to recover and to dry out from the opium that has ruled her life for years. Cherry's withdrawal from the drug is a living hell with the inevitable physical pain but also with nightmares that force her to relive the multitude of horrific events in her past. Cherry's drive and fight is whittled down during this period and it is a life or death struggle for sobriety. Cherry only has to pull her way through the pain and the fugue left by her drug addiction in order to learn about Ashmore, her mother and the alchemical arts studied by both her parents. Secrets are lurking at every turn and it will take everything Cherry has and more to fight her addiction and find out who she really is and what she is capable of.

I was really looking forward to Tempered as Cooper managed to leave us with such a huge cliff-hanger at the end of book 3 even after wrapping up so many plot threads from the previous books. Tempered almost felt like a stand-alone book as Cherry's story is told at her family's cold and crumbling estate and far away from London and the Menagerie where the last three books have been set. The story focused mainly on Cherry and Ashmore's relationship. He becomes the tool for her to learn about her mother. The chapters of the book involving Cherry's withdrawal from opium were particularly harrowing due to the realistic and believable way they were written. It was almost like you were there, suffering along with Cherry.

I didn't, however, warm to Oliver Ashmore as a character. I thought it was a bit odd how often comparisons where made to the colour of Cherry and Ashmore's hair and I thought that he was going to end up being related somehow. However, later in the novel I thought it even more unusual when these comparisons continued even after he becomes a romantic interest. I wasn't sure if I was 'reading' too much into this or I was missing the point. I also thought that given Cherry's character that she would have been less likely to pursue a romantic relationship with Ashmore given the disastrous way her first sexual encounter with Hawke ended. She was going through opium withdrawal so I will let her off with bad choices at this point. It felt in parts that the story is moving more towards PNR rather than its beginnings in steampunk or noir. I hope this isn't the case.

Cooper manages to wrap up yet another plot line that started back in book 1. It feels like she is really tying up loose ends. But what of the enigmatic Micajah Hawke?  He is mentioned but does not play a part in this instalment, much to my dismay. Hopefully, book 5 will see more of the Menagerie's bad boy ring master. I didn't enjoy Tempered as much as the others books in the St. Croix Chronicles. I thought it was quite similar in some respects to Oscar Wilde's The Picture of Dorian Gray. In Wilde's story the young Dorian's life is linked to his portrait which stores his sins while he leads a life of debauchery and vice. In Tempered however, Ashmore stores the 'life force' of his victims in their portraits and fuels his immortality from them. Perhaps it was this similarity that helped me to predict what would happen next, something that I hadn't been able to do so far.  I do really enjoy the series though and I like the way that Cooper deals with a character that is so flawed and with such a debilitating addiction. I am looking forward to see what Cherry is up to next. Bring on book 5!
Source: qwillery.blogspot.com
0 Comments+ Sharelabels (8)Flag
AllBook ReviewsCarina PressKarina CooperMelanieTemperedThe St. Croix Chroniclesreviewsteampunk