The Qwillery | category: The Lft Hand of God

Retro Reviews: The Left Hand of God by Paul Hoffman 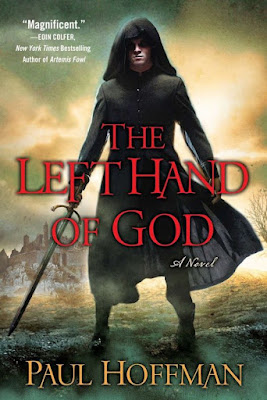 Paul Hoffman was born in 1953 in England. He spent his childhood traveling the world as his father was a pioneer in the sport of parachuting. He went to school at New College, Oxford. He had several odd jobs until he became a senior film censor at the British Board of Film Classification. It was there that he wrote his first book The Wisdom of Crocodiles in 2000. The Left Hand of God is his third novel. Five of his books have been published to date.

Raised from early childhood in the Redeemer Sanctuary, the stronghold of a secretive sect of warrior monks, Thomas Cale has known only deprivation, punishment, and grueling training. When he escapes to the outside world, Cale learns that his embittered heart is still capable of loving- and breaking.

I've been wanting to read this book for a while now, but as we all do from time to time I passed on it for other books. Then, I got the second book in the series to read and review and found the perfect reason to pick up this, the first book in the series.

Right away Paul Hoffman's writing drew me into his story. His characters and world were all very interesting. He has a way of writing that brings in an atmosphere almost immediately. While reading about the Sanctuary filled with abusive clergy and forgotten and abandoned children, I felt a dampness, and in my peripheral vision I saw the fog. Outside of my home, I was surrounded by miles of bogs. This is what I want when I read. I want to feel the environment of the book closing in around me.

Thomas Cale and his two friends, for lack of a better word, have a wonderful dynamic. None of them truly like each other or even trust each other, because they were taught never to trust another person, but somehow they are able to work together and escape only to find a stranger world outside of the Sanctuary. I immediately latched onto Thomas and felt sorry for his past. He's strong and I love a strong hero, but he's leery of helping and trusting others, so he has his faults.

Hoffman's setting is odd. It's obviously set in a European-type middle ages. He borrows from familiar cultures like England, Rome and even Japan. The Materazzi reminded me of Samurai at times with their sense of honor in battle. Then, at the oddest moments he uses cities and countries and even religions from our world. Memphis, Kiev, Jerusalem, Norwegian, Jesus of Nazareth, Rabbis. So I'm still confused if it's our actual world but in a future where something apocalyptic sent us back into a dark age, or if his world is an alternate Earth that never left the middle ages and kept going for thousands of years. I wouldn't mind either, but I sure would like to know which one it is, so I wasn't being thrown out of the story each time he brought in another city or person from my world.

The last thing I want to mention is the pacing of the story. It's not slow as in when will this end, but it's definitely not fast. I enjoyed the pacing and took my time with the book as I enjoyed Hoffman's world and characters. However, I do feel it's worth mentioning, since I know a lot of readers that only enjoy reading books that grab you by the neck and drag you kicking and grinning.

The Left Hand of God is an intriguing first book in a trilogy. Nothing is as it appears. The pacing can be slow at times and it has an odd setting, but the protagonist Thomas Cale is too interesting to give up on. I'll be reading book 2 next and seeing if some of my questions can be answered, but at the very least I'm sure to enjoy spending more time with Cale. There is violence, language and minor sexual situations. I would recommend it to adults only. As of right now I would recommend you borrow the book from a friend or library. This recommendation might change once I've read more of the series.
Source: qwillery.blogspot.com
0 Comments+ Sharelabels (5)Flag
AllBranniganNALPaul HoffmanRetro ReviewsThe Lft Hand of God