The Qwillery | category: The Pariah

Review: The Pariah (The Covenant of Steel 1) by Anthony Ryan 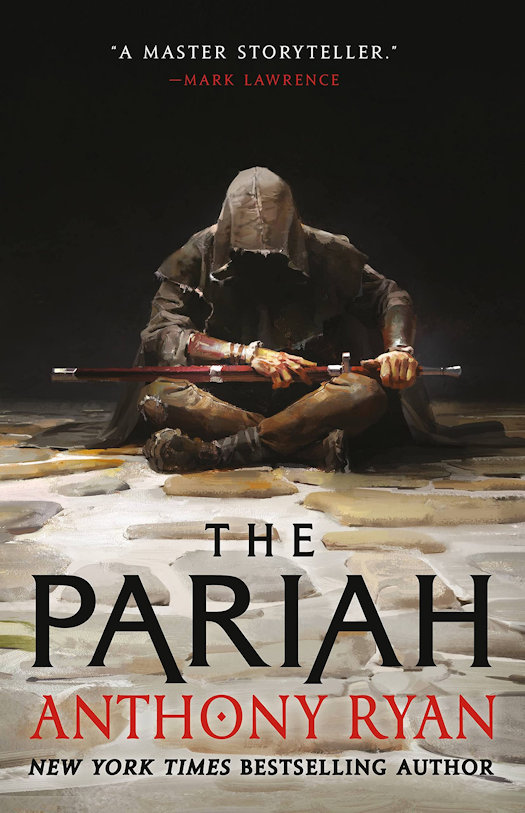 "A gritty, heart-pounding tale of betrayal and bloody vengeance. I loved every single word." —John Gwynne
The Pariah begins a new epic fantasy series of action, intrigue and magic from Anthony Ryan, a master storyteller who has taken the fantasy world by storm.
Born into the troubled kingdom of Albermaine, Alwyn Scribe is raised as an outlaw. Quick of wit and deft with a blade, Alwyn is content with the freedom of the woods and the comradeship of his fellow thieves. But an act of betrayal sets him on a new path – one of blood and vengeance, which eventually leads him to a soldier's life in the king's army.
Fighting under the command of Lady Evadine Courlain, a noblewoman beset by visions of a demonic apocalypse, Alwyn must survive war and the deadly intrigues of the nobility if he hopes to claim his vengeance. But as dark forces, both human and arcane, gather to oppose Evadine's rise, Alwyn faces a choice: can he be a warrior, or will he always be an outlaw?
"This makes a rich treat for George R.R. Martin fans." —Publishers Weekly (starred review)
For more from Anthony Ryan, check out:
Raven's Shadow Trilogy
Blood Song
Tower Lord
Queen of Fire
Raven's Blade Duology
The Wolf's Call
The Black Song
The Draconis Memoria Trilogy
The Waking Fire
The Legion of Flame
The Empire of Ashes

Amazon : Barnes and Noble : Bookshop : Books-A-Million : IndieBound : Powell's
Google Play : iBooks : Kobo
Trinitytwo's Review:
The Pariah, book one of New York Times best-selling author Anthony Ryan’s The Covenant of Steel trilogy, opens with murder. Alwyn, is smart, quick with a knife, adept at disguise and a shrewd judge of character. He is also a liar, a thief and the aforementioned murderer, making him a valuable asset to Deckin, the self-proclaimed ruler of the Shavine Marches. Alwyn and his companions carry out their mission with deadly efficiency, to reap the rewards of a royal convoy’s cargo. But Alwyn and his ilk are no ordinary brigands. Deckin’s target has a purpose other than ill-gotten gains; to intercept the royal courier. The messenger carries a missive for the King containing sensitive information about the Pretender’s War; information that Deckin desperately wants. This message tips the scales and events begin to unfold quickly, leading to a course of action that will shake Alwyn’s life to the core.
One of the things I love about The Pariah is how it surprised me. I tend to avoid reading books heavy in gratuitous violence, so the blasé killing in the first chapter rang a warning bell or two. However, I am a huge fan of Anthony Ryan so I kept reading. And I was not disappointed. Ryan is a master storyteller whose every detail is filled with intention. Before I knew it, I was well into the third chapter and couldn’t put the book down. To hell with responsibilities and work, I needed to keep reading!
The Pariah checks off all my fantasy reading requirements. Alwyn is a multi-faceted character that often surprised this reader (and himself) with his decisions. His motivations and his loyalties are complex, which leads him time after time into dangerous and desperate situations. Since Alwyn is always on the move, his roster of companions changes and yet Ryan does a great job of keeping the names and faces memorable. There is never a “who is that again?” moment for which I’m grateful.
Speaking of memorable characters, I really enjoyed the vague likenesses to historical or legendary figures in our own timeline. Take for instance, Lady Evadine Courlaine. This beautiful and courageous noblewoman/warrior inspires and encourages loyalty to which even Alwyn, bent on a road of vengeance, is not immune. Her eloquence and earnestness, coupled with her bravery on the battlefield conjured (for me) comparisons to Joan of Arc. Yet, Evadine is her own person. Tormented by visions of a demonic apocalypse, her insight allows her to see into other’s hearts and capture them. She shines as a commander, both considerate of her soldiers and unyielding in her quest to prevent the Second Scourge.
Another remarkable character is the self-proclaimed Outlaw King, Deckin Scarl. Although the common folk give Scarl a “rob from the rich and give to the poor” reputation, he and his band of outlaws are a far cry from being “merry men.” Scarl’s followers are brutal folk whose warped values and violent natures are kept in line only by Scarl’s iron leadership. Due to Ryan’s mastery of the written word, I can picture him down to his callused and massive hands.
I appreciate how Ryan maps out Albermaine through Alwyn’s travels. Through highly descriptive dialogue and first-person narrative, Ryan transports readers directly into the story. We meet Alwyn in the Shavine Marches and travel to Moss Mill in the northern part of the Shavine Forest. Through action-packed storytelling, we visit Castle Duhbos and spend time in the Pit Mines. As Alwyn navigates his way through betrayal, vengeance, intrigue and the ugliness of war, the reader learns key facts about Albermaine and the surrounding lands’ history and political systems, alleviating the need for tiresome exposition dumps.
Paradoxically, The Pariah is a welcome escape to a world riddled with war and violence. And although Alwyn is a murderer and a thief, his unique brand of loyalty and morality keep him likable. I am fascinated by the hints of the magical system that Ryan has sprinkled throughout the story and want more. Reading The Pariah filled me with adrenaline and excitement and I would highly recommend adding it to your TBR list.
Source: qwillery.blogspot.com
0 Comments+ Sharelabels (5)Flag
AllAnthony RyanOrbitThe Covenant of SteelThe Pariahtrinitytwo