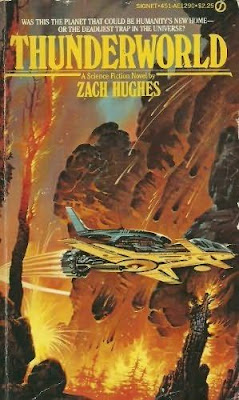 Zach Hughes is a pen name for Hugh Zachary. Zachary was born January 12, 1928 in Oklahoma. He went to school at University North Carolina-Chapel Hill. He ran a book factory with his wife Elizabeth in North Carolina. He also worked in radio and TV broadcasting, and as a newspaper writer, carpenter, charter fishing boat, commercial fishing, and served as a mate on an anchor-handling tugboat in the North Sea. He quit working full time in 1963 and focused on writing. As far as I can tell his first book was One Day in Hell published in 1960, and the most recently published work is Munday in 2003. Besides using Zach Hughes, he as also written under the names of Peter Kanto, Peter Danielson and Evan Innes. He's published at least 50 books that I could find under his pen names.

When the crew of the four-person scout ship Santa Maria first sighted the new life-zone planet, they dubbed it “Worthless.” A little too far from its mother sun for comfort, caught in the grip of conflicting gravitational pulls, Worthless was a planet in constant upheaval, not at all the sort of world fit for human colonization. Still, time was running short for the people of Earth to fine a new home, and this was the first place that even approached livable conditions, So Don, Zees decided to do a close-up study of the planet's surface while Breed and Ellen stayed in orbit overhead. But shortly after they landed, there was a cataclysmic upheaval, a worldwide convulsion that brought death to many of the primitive life forms and left Don and Zees stranded. Forced to go native and live off the land till their shipmates could find them, neither of the humans could guess that the next meal they ate would change the future of a planet...

I'll admit that the cover is what grabbed me while shopping at my favorite used book store. It's full of action and tension with an awesome retro rocket. I also love the title, THUNDERWORLD. It really demands all caps. I was ecstatic to discover the story inside was both entertaining as well as engaging.

Zach Hughes (I'll use the pen name) is an author with great skills. With only 151 pages he doesn't have a lot of room to waste time, and he doesn't. From the first page, I was sucked in and immediately caught off guard by an odd entity known as Goroin Melt of Roag, an alien creature of some kind that is looking for a new body. Even though this was not how I expected the book to start, I was fascinated. Hughes doesn't give a lot of clues about Goroin at first and when he does he sprinkles it out over their first 50 pages as he searches for a new body and his desire for revenge. Intermixed with these chapters I was on mission with the four-person crew of the Santa Maria. They've been on a deep space mission for over two years looking for a new livable planet. Earth is overpopulated and constantly on the brink of war.

Out of the crew, Don and Zees are the two characters that Hughes focuses on the most. He also doesn't spend a lot of time giving a very complex back story for the characters, but once the action starts I learn all I need to know about them by their actions, which is a great way to develop character when there aren't a lot of pages.

I don't think I'm giving anything away by saying that Goroin, Don and Zees find themselves interacting. I won't give to much detail about this as it was the most enjoyable part of the story for me. Goroin is the most unique and fresh take on an alien I've ever read. Granted, I'm still pretty new to Science Fiction novels, but I couldn't get enough of him and his community once he finds them. Don, Zees and Goroin soon find a working relationship and help the survivors of a massive earthquake prepare for the next big stage in the planet's evolution. Then, just as everything appears to be wrapping up in a nice little bow, Hughes completely sideswiped me and didn't stop to trade insurance information. He just took the story in a completely different direction that I didn't see coming and I thoroughly enjoyed it.

Along with everything else that's great about this book, Hughes finds time to delve into some great topics regarding population control, freedom, human relations and environmentalism. He handles each of them so gently you won't even notice if you don't want to, but for those of you who like to see different perspectives and philosophy, you'll get a little treat.

Thunderworld is a one of those finds that reignites the adventurous spirit in me to continue to dig deep in the used book store or library to find hidden treasures. I can't recommend this book enough. There are a few minor moments of violence, and only implied adult situations, so I have no problem recommending this book to teens or adults. If you're a fan of thoughtful, imaginative science fiction, go find a copy of this book or buy it online.
Source: qwillery.blogspot.com
2 Comments+ Sharelabels (4)Flag
AllBranniganRetro ReviewsThunderworldZach Hughes