I started to worry when I hit Wednesday and I hadn't finished a single book and therefore would have nothing to say to you in this Week in Review. I didn't even have a excuse like I was studying for a test but then it all came together towards the end of the week and I got two books read. I am returning to work next week after 2 months away so hoping that with the commute time that I am able to get back in the reading saddle and get through some books.

I started and finished the week with The Kingmakers by Susan and Clay Griffiths. This was the final book of the Vampire Empire trilogy and wrapped up the story for the Queen Adele and her vampire consort Greyfriar/Gareth. This was another treat in my book care package that I received a few weeks ago.  I read the first two books - The Greyfriar and The Riftwaker back in 2012 and had been searching for the final book since then. I could only find it here in the UK in the very expensive hardcover version and didn't feel like parting with £15+. I was very lucky to receive a review copy.

I enjoyed Griffiths' alternate world where vampires ruled Britain, Ireland and parts of France with Persia, Egypt and the rest of the middle East as the civilised world in the domain of humanity. I thought both lead characters Adele (a human Queen) and Gareth (a vampire prince) were well developed throughout all three novels and Griffiths' steampunk world was rich in detail. The start of this story found the pair in the midst of the war which was slaughtering most of the Empire's army and civilians as well.  Back in Britain, Gareth's brother Cesare was making plans to place himself as the king of the vampire race after a little patricide. This part of the story was really engaging and I was a little surprised I enjoyed it as much as I did as I don't often like stories with military themes. The story seemed to almost slow down once the main battle was done and felt like it was dragging. The rest of the action including the culmination of at least 3 different plot lines all happened in the last 15-20 pages. It felt very rushed after drawing out the middle chapters. Overall, this is a good series, set in an interesting world.

I also finished The Wicked We Have Done by Sarah Harian which is one of the debuts out next week and the first in the Chaos Theory series. I will be writing a full review of this book so be sure to check back on Tuesday to find out what I thought.

I only just started Dream London by Tony Ballantyne which has me really intrigued as I have no idea what  is going on! Sometimes, I like the feeling that a book is going to challenge me and get my brain working.  I hope to tell you more about this book next week when I will also hopefully figure out what it is all about.

I am keeping this WIR short and sweet as I have been taxing my typing skills and your reading skills over the last few weeks. Until next week Happy Reading.

Published:
I just saw this wonderful book trailer for The Greyfriar (Vampire Empire Book 1). I find it majestic. I can't wait to read the book (which I will be picking up tomorrow).

The Greyfriar is written by Clay Griffith and Susan Griffith. The cover of the book was created by my favorite cover artist: Chris McGrath. 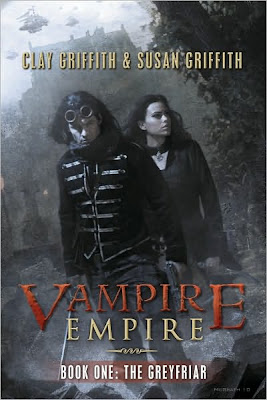 In the year 1870, a horrible plague of vampires swept over the northern regions of the world. Millions of humans were killed outright. Millions more died of disease and famine due to the havoc that followed. Within two years, once-great cities were shrouded by the gray empire of the vampire clans. Human refugees fled south to the tropics because vampires could not tolerate the constant heat there. They brought technology and a feverish drive to reestablish their shattered societies of steam and iron amid the mosques of Alexandria, the torrid quietude of Panama, or the green temples of Malaya.

It is now 2020 and a bloody reckoning is coming.

Princess Adele is heir to the Empire of Equatoria, a remnant of the old tropical British Empire. She is quick with her wit as well as with a sword or gun. She is eager for an adventure before she settles into a life of duty and political marriage to a man she does not know. But her quest turns black when she becomes the target of a merciless vampire clan. Her only protector is the Greyfriar, a mysterious hero who fights the vampires from deep within their territory. Their dangerous relationship plays out against an approaching war to the death between humankind and the vampire clans.

Vampire Empire: The Greyfriar is the first book in a trilogy of high adventure and alternate history. Combining rousing pulp action with steampunk style, Vampire Empire brings epic political themes to life within a story of heartbreaking romance, sacrifice, and heroism.