Published:
Welcome to The Qwillery! Today's guest is Lisa Shearin, the author of the Raine Benares series.

TQw: Who are some of your favorite writers? And who do you feel has influenced your writing?

Lisa: Those who have followed me over the years know that Jim Butcher’s Dresden Files is my favorite series. Rob Thurman’s Cal Leandros novels and Ilona Andrews’ Kate Daniel books are two of my other favorites. Robyn (Rob) and Ilona are amazing authors, great girls, and two of my author friends. I haven’t had the thrill of meeting Jim Butcher yet, but I have hopes.

Many authors have inspired me over the years. Back in the 80s, I devoured any and all books by David Eddings, Raymond Feist, and Terry Brooks. I also read detective fiction and crime capers by Raymond Chandler, Dashell Hammett, Leonard Elmore, Ed McBain, and Donald Westlake. I mix genres in my books, and I do the same with the books I like to read.

TQw: What inspired you to write your first novel?

Lisa: That I couldn’t find anything I wanted to read at the bookstore. My college roommate got tired of hearing me complain and asked me why I didn’t just write my own. So I did. But it took years before my books got to the point that even I would want to read them. I have three practice books in my office closet, and they’re gonna stay there.

TQw: Who would you pick to play Raine Benares if your books were ever made into movies?

Lisa: That’s easy. Felicia Day. Not only is she a great actress, but she’s also a big fan of my series, and has to be simply one of the nicest people on the planet.

TQw: Do you and Raine have anything in common?

Lisa: My husband says we have everything in common, that I am Raine. Ehhh, I don’t think so. I do wish I had her ability to pop back snappy one-liners in a conversation. Heck, by the time I think of a snarky comeback, the conversation’s been over for three hours.

TQw: If you could have a magical power, what would it be?

Lisa: Oh, I definitely know that one. I want to be able to translate the thoughts/images/sounds in my head onto the page. I’ve heard so many writers say that one of the hardest things to do is to get what’s on the page to be as good as what they see/hear in their head.

Lisa: I’m finishing Raine’s fifth adventure now – Con & Conjure, which will hit bookstores on March 29 of next year. Then I’ll write All Spell Breaks Loose, which will come out in 2012. This winter I’ll be writing proposals for two new series that’ll be challenging and fun to write. I’ll be trying to raise the writing bar for myself with these.

TQw: A big thank you to Lisa for being our guest.

Book 1
My name is Raine Benares. I’m a seeker. The people who hire me are usually happy when I find things. But some things are better left unfound…

Raine is a sorceress of moderate powers, from an extended family of smugglers and thieves. With a mix of street smarts and magic spells, she can usually take care of herself. But when her friend Quentin, a not-quite-reformed thief, steals an amulet from the home of a powerful necromancer, Raine finds herself wrapped up in more trouble than she cares for. She likes attention as much as the next girl, but having an army of militant goblins hunting her down is not her idea of a good time. The amulet they’re after holds limitless power, derived from an ancient, soul-stealing stone. And when Raine takes possession of the item, it takes possession of her.

Now her moderate powers are increasing beyond anything she could imagine—but is the resumé enhancement worth her soul? 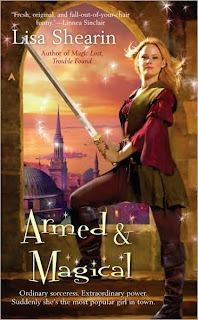 My name is Raine Benares. Until last week I was a seeker—a finder of things lost and people missing. Now I’m psychic roommates with the Saghred, an ancient stone with cataclysmic powers. Just me, the stone, and all the souls it’s ingested over the centuries. Crowded doesn’t even begin to describe it…

All Raine wants is her life back—which means getting rid of the stone and the power it possesses. To sort things out, she heads for the Isle of Mid, home to the most prestigious sorcery school, as well as the Conclave, the governing body for all magic users. It’s also home to power-grubbing mages who want Raine dead and goblins who see her as a thief. As if that’s not enough, Mid’s best student spellsingers are disappearing left and right, and Raine’s expected to find them.

Lives are at stake, goblins are threatening to sue, mages are getting greedier, and the stone’s power is getting stronger by the hour. This could get ugly. 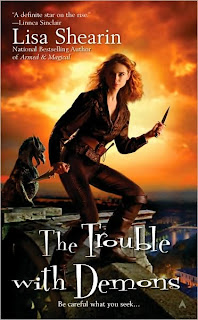 My name is Raine Benares. I’m a seeker. People hire me when they need something found. I’m not usually the one being sought. But that all changed when I found the Saghred, a soul-stealing stone of unlimited power — and the bane of my existence. Now mages and madmen have me in their sights, not to mention demons…

An opened Hellgate leads to a demon infestation on the Isle of Mid, and while there’s never an ideal time to face down demon hordes, it’s hard to imagine a worse one. Already fighting the influence of the Saghred, Raine discovers she is also magically bonded to a dark mage and a white knight, two dangerous and powerful men on opposing sides — and Raine’s stuck in the middle.

But with demons pouring through the Hellgate, Raine can’t afford to be distracted. Turns out, the demons want the key to unlock the Saghred. As a seeker, Raine should be able to find it first. As the axis of light and dark powers, she’s a magical cataclysm waiting to happen… 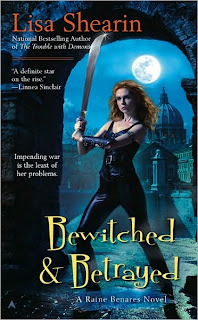 My name is Raine Benares. I’m a seeker. I find lost things and missing people — usually alive. Finding the specters of six evil mages who escaped the Saghred, a soul-eating stone of unlimited power, was easy. Stopping them before they unleash Hell on earth just may be the death of me.
Being bonded to the Saghred wasn’t my idea — neither is hunting down its escapees. Especially not when one of them is also hunting me. He’s regenerating his body by taking the lives of powerful victims, along with their memories, knowledge, and most important of all, their magic. The dark mage wants control of the Saghred, and if he gets it, he’ll become an evil demigod whom no one can stop. The only thing in his way is me.
One of us doesn’t stand a ghost of a chance.
Now for the goodies! The Qwillery is giving away 2 prizes - one commenter will win the first 4 Raine Benares books and 1 commenter will win a copy of the latest Raine Benares book, Bewitched & Betrayed.

Leave a comment telling us what magical power you would like to have. I wish I had the power to snap my fingers and perfectly tidy any room!
We’ll put all the names of all commenters in the DubbleBubble receptacle and pull out 2 names - one for each prize. If you tweet the contest, we’ll put your name in for the tweet as well. You can tweet as much as you like, but it only counts once. If you also mention the contest on Facebook, we’ll add your name again. You can mention it on Facebook a zillion times, but you only get one extra entry. You can also mention the contest on your blog to get another entry. So you can get your name placed in the receptacle a maximum of 4 times (comment, tweet, FB mention, blog mention). Provide us a link in the comments so we know that you tweeted or Facebooked or blogged.


The contest is open to all humans on the planet earth with a mailing address. Contest ends at 11:59pm Eastern Time on Monday, May 10, 2010.
Source: qwillery.blogspot.com
53 Comments+ Sharelabels (5)Flag
AllInterviewLisa Shearinbooksgiveawaymagic