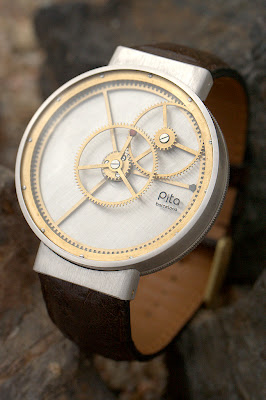 I'm honored to be the first watch blog to share the brand new prototype from Pita Barcelona. The Pita Molinos (Windmills) project presents a watch with no hands and no crown. Floating hour and minute gear wheels rotate around the dial to indicate the time. Shown above, the time is 12:15. The finished models should be ready by September-October 2009 and they are already taking reservations at www.pita.es 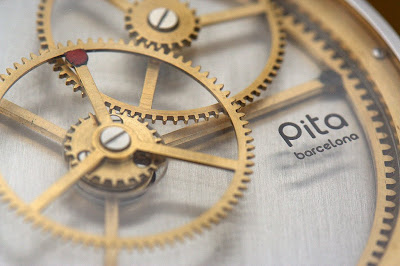 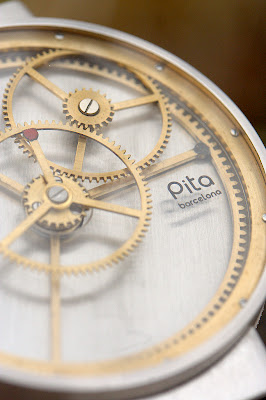 No hands timepiece. Floating hour and minute wheels telling directly the time, without hands. Wheels and cannon pinion elegantly maximized with embedded precious stones (laquered finish in shown prototype) to indicate the time, in an unprecedented and ethereal manner.

Designed and handmade in Barcelona Spain. Short and numbered series.

Fully customizable. Unlimited assortment of dials, hands, straps and buckles to choose from. 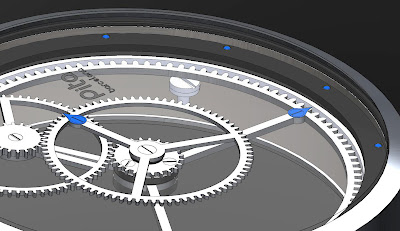 Barcelona watchmaker, Aniceta Pita released his Pita RE2, a new chronograph with unique non-protruding case-flush pushers and crown. A member of the exclusive AHCI (Horological Academy of Independent Creators), Pita has created a limited edition of 59 RE2's featuring modified vintage Lemania 5100 movements and a patented TSM system of ball bearings to reduce friction. Pita website-->Link
(RE2 is not shown yet on his site) An earlier Pita "Carousel" with a single hand that is attached to the movement itself. Note the visible ball bearings.