As of today, adventurer Steve Fossett is still missing after his plane disappeared last week. One of the more troubling details is that his Breitling Emergency wristwatch has yet to be turned on.

A downed pilot can activate a micro-transmitter in the watch by unscrewing the cap, pulling out the antenna, and waiting for rescue. (A Breitling Emergency success story from 2003-->Link) Bullhead Chronographs, as they're called, feature the crown and pushers on top of the case instead of the side. Due to the rarity of the configuration, more liberties are taken in regards to the overall design, many dials are angled up for a drivers style and feature unusual dials. A long way of saying they are some of the coolest damn watches made in the sixties and seventies. 1970 Bulova Bullhead (above) with the famous Chronomatic Calibre 11, the first automatic watch with a micro-rotor. Also used in the 1969 Heuer Monaco.
Additional photos here-->Link 1969 Omega Bullhead also featuring the Chronomatic movement. A case that is much wider at the top. Very rare. Link to additional photos-->Link The bully of the Bullheads, the 1972 60mm wide Desotos Chronograph, first featured here-->Link Another obscure 1970's Bullhead by Fleurier, a giant chunk of metal disguised as a chronograph. Below is the even larger triangular Sorna Bullhead with world time. 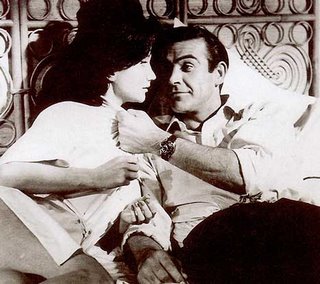 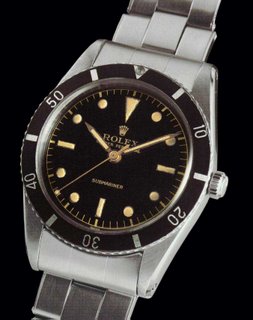 James Bond generally prefers wearing a Rolex Submariner or Omega Seamaster throughout the series but when issued a specialty watch from Q-Branch, 007 has worn every gadget from Geiger counters to circular saws. Interestingly, the first James Bond, 'Dr. No' had no real gadgets at all. 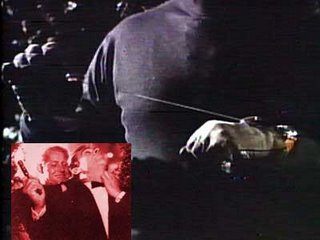 1963's 'From Russia With Love' is the first 007 movie to introduce a multi-function watch, only it's worn by the villain, Red Grant. Fitted with a retractable piano-wire for strangulation.
Use
Grant tried to strangle Bond with the wire aboard the Orient Express during a fierce battle. However when Bond was being choked, he grabbed for his throwing knife and stabbed Grant in the leg, snatching the wire and strangling him.
Specs
An ordinary looking wrist watch, but on the side of it was a small tab, when pulled, a long steel wire would retract like a tape measure. 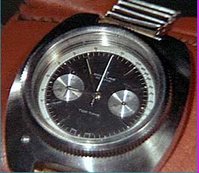 Use
Bond gave the camera to Domino, with instructions to turn it on whilst aboard the Disco Volante, Domino did this and the device worked well. However Largo came into the room, Domino dropping it in fright, Largo was not a fool and heard the distinctive clicking noise of the Geiger counter. And began to torture Domino, who was saved by Kutze who had a change of heart when the bombing was ordered.
Specs
An ordinary small camera, common to the one's carried by tourists. However it contained a Geiger counter device, with it's reading gauge around the bezel of the lens. 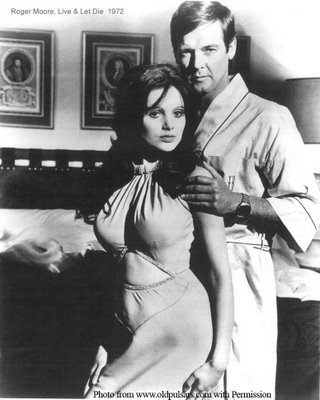 Almost timing to real world watch technology innovations, Roger Moore is introduced as the new 007 and with that - some of the most inventive watches of the series are introduced in 1973's 'Live and Let Die.' 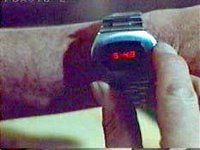 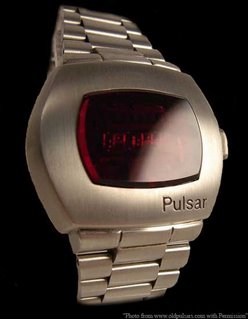 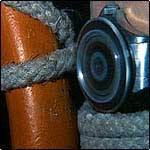 Use
Bond firstly used his watch for a more entertaining purpose, by activating the magnet and unzipping Miss Caruso's dress. Towards the end of the mission when Bond and Solitaire were being lowered into Kananga's shark pool, Bond used the magnet to get hold of a compressed air bullet. Bond then used the mini saw to cut through the rope around his wrists and free himself. After a fight with Kananga, Bond forced the bullet into Kananga's mouth, making him "bite the bullet".
Specs
A standard looking Rolex diving watch with a few added extras: 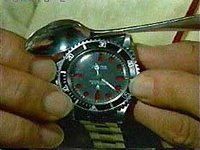 Use
This device was used to dispatch Bond back to headquarters. He was required to "pull out" of his current "mission", in a warmed up log cabin with a stunning blonde KGB agent.

Specs
A digital watch with an in built satellite link, short messages could be sent from MI6 and printed from the watch on a thin spool of tape. 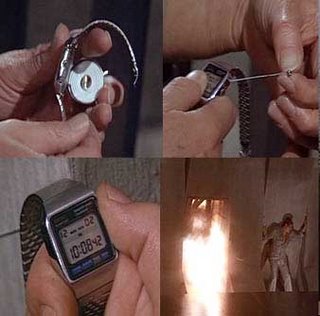 Use
Bond and Holly Goodhead were trapped inside the bunker of a space shuttle's launch pad, under it's rocket boosters. Time quickly running out, Bond removed the explosive, stuck it to a welded exhaust grate and blew it off the wall, making for an easy escape.
Specs
A digital watch, with an extended back-plate that could be removed to reveal a small but powerful explosive charge and a detonator wire. The explosive is removed and the detonator wire plugs into the side of the watch, a button detonates the explosive at a safe distance. Octopussy Wrist Dart Gun
(replica)
Use
Bond used the wrist dart gun 3 times, once saving his life. Firstly he tested it out in M's office by firing a dart into a painting. Bond's life saving came, when he was in a centrifuge, the control room was taken over by Drax's henchman Chang, who turned up the G's to a lethal volume. Bond flicked his wrist, firing an amour piercer into the overridden stop button, stopping the machine with a short circuit. Lastly Bond used a poison tip to kill Drax, firing it into his heart and forcing him though an airlock into space.
Specs
A small gun like device propelled the darts by using pressurised gas, good for 10 firings before refill. The poison tipped darts, were coated with concentrated cyanide, the amour piercing dart had cores of depleted uranium - like the ammunition used in large bore military machine guns. 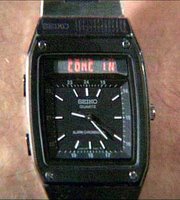 Use
A newer version of Bond's mothballed ticker tape watch, the Voice Link watch. Beeped at Bond, just as he was ready for a moonlight swim, Bond threw the watch to Melina Havelock's pet parrot. None other than Margaret Thatcher was on the other end of the line from 10 Downing Street, where Q had wired up the phone to the satellite link.
Specs
A digital/analogue combination watch, with a built-in satellite phone to receive calls direct from MI6. 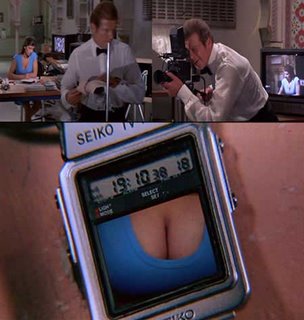 Use
Isn't it obvious? 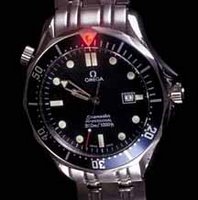 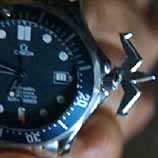 Use
"Goldeneye": When Bond and Natalya got trapped inside the ICBM train, surrounded by one-inch thick amour plating. As Natalya pounded away at a computer keyboard trying to trace Boris' location, Bond activated the laser cutter on his watch and proceeded to cut a manhole in the floor of train. With seconds left, Bond ripped Natalya away from the computer, the two dived through the man hole, and ran from the train seconds before it exploded. Later in the mission, Bond had a series of magnetic mines activated in Trevelyan's HQ, and his watch could arm or disarm the mines. Trevelyan, being a former MI6 agent, knew about Bond's watch, he took it from Bond and disarmed the mines.
"Tomorrow Never Dies": Bond picks up a new version of the Omega courtesy of Wai Lin's stock of gadgets. Bond uses the detachable remote detonator to make a booby trap with a grenade and a glass jar. When Bond needs a diversion after Carver shoots his hostage, Gupta, 007 triggers the detonator causing the grenade to pop free and self-arm.
"The World Is Not Enough": Bond first uses the watch to illuminate the inside of the inflated bubble ski jacket whilst himself and Elektra are trapped in an avalanche. The watch is useful later, when stuck in an inspection pit in the nuclear bunker, Bond fires the piton wire to jump 50 feet.
Specs
An Omega Seamaster with blue face and bezel. Modified to incorporate a high-power laser diode, capable of cutting through two inches of steel. It was also equipped with a button used to arm and disarm the magnetic mines.
Wai Lin's gadget masters incorporate a detachable detonator into the watch for "Tomorrow Never Dies". Bond notes they have a newer version than his Quartermaster at MI6.
For "The World Is Not Enough", the watch is fitted with a miniature grappling hook which includes a 50 foot high tensile micro filament, able to support 800 pounds. Bond puts this into use to escape a potentially explosive situation. Q-Branch has also incorporated dual high-powered lasers into the design, and the casing is made from titanium. 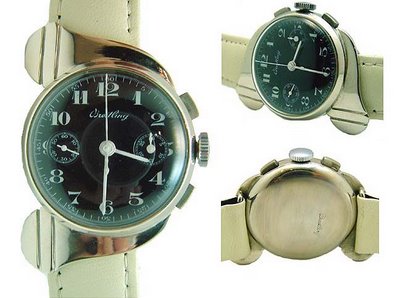 Not the typical flying instrument Breitling is known for. Complex aviation intruments like their classic Navitimer or the modern microtransmitting Emergency. This deco streamline moderne beauty is more likely to fly itself than help you navigate or be rescued.

Found online for $3900. Email me (watchismo@gmail.com) if you want to contact the dealer of the winged chrono.