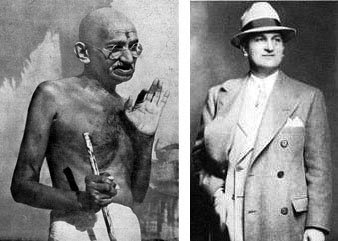 The cast for the next Hollywood buddy film? I wish. Actually, these two polar opposites are being tied together with an upcoming auction of their timepieces.

Impress your family and friends with the ultimate Yin and Yang of time. After making a killing with Albert Einstein's wristwatch, Antiquorum will be auctioning this "Godfather Clock" and "Pocket Peace" in early March, 2009. 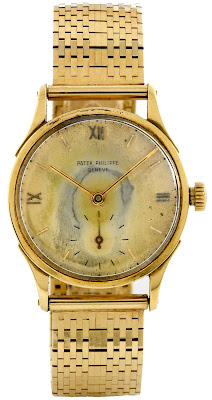 Giuseppe Bonanno Watch
A yellow gold Patek Philippe, Ref. 1516, that belonged to the late Giuseppe Bonanno, Sr. (the “Godfather” of the Bonanno crime family) is also included in Antiquorum’s upcoming auction. It is a fine, extremely rare and important, 18K yellow gold wristwatch, which is accompanied by a letter of authenticity from his daughter, Catherine Bonanno.

Mr. Bonanno was an original member of the “Commission,” founded in 1931, whose purpose was to establish rule by consensus among the crime families. Other members included the leaders of the Five New York Families: Charlie Luciano , Joseph Profaci , Gaetano Gagliano and Vincent Mangano. It is thought that the character of “Vito Corleone” in Mario Puzo’s novel, “The Godfather” was inspired by Bonanno. The watch was given to him by Charlie “Lucky” Luciano in 1957 in Sicily. 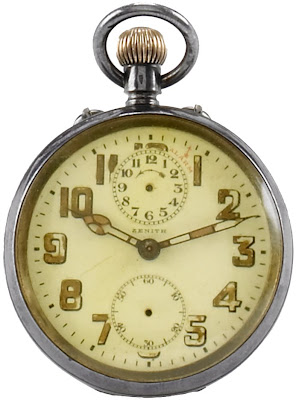 Gandhi Pocket Watch
In addition, Mahatma Gandhi’s silver Zenith pocket watch (circa 1910-1915) is expected to attract significant interest. The pocket watch belonged to Gandhi, who later gave it to his grandniece, Abha Gandhi, his assistant of six years, and in whose arms he died. Also offered as part of the same lot are Gandhi’s sandals, glasses, bowl, plate, and letters of authenticity.

A beloved leader of India’s independence movement and one of history’s most widely-recognized and revered civil rights leaders, Gandhi pioneered non-violent civil disobedience and pacifism in response to tyranny.

Also included is the "Kennedy Onassis" Watch, a waterproof Nastrix wristwatch owned by both President John Kennedy and Aristotle Onassis. Oh Jackie, that's so not cool...

The Killer Zodiac Watch of the Zodiac Killer

Published:
Warning! If you haven't seen the film "Zodiac" by David Fincher (Fight Club, Se7en), this post contains spoilers for the movie.

This was a note left by the serial killer, the "Zodiac" in the late 1960s - One of many letters to the press taunting the police with ciphers and threats, terrorizing the city of San Francisco all the way through the mid-seventies. This one in particular described how he wanted people to wear his trademark crosshair logo on buttons with obvious hints of future bloodshed if he wasn't satisfied. Originally, his unsigned notes announced himself as "the killer". But soon after, he was compelled (if not convinced) to create an identity. Following letters featured a circle with crosshairs and the name "Zodiac", it was soon discovered later that the image and name combination was directly borrowed from the Swiss watch brand of the same name and same logo. Zodiac watches were the only known source where both were used. Although the crimes were never officially solved, the prime suspect (to this day) did own a Zodiac Seawolf watch. It wasn't a very common brand to own and many other clues have linked this man to the murders. I've included the film scene below featuring the suspect interviewed by police where they discover his timepiece of choice. Forgive the quality, it was taped directly from my TV.

Press play above or go to the video-->Link And an assortment of other vintage Zodiac
Seawolf Divers of the sixties, seventies and today;