Showcasing a new dimension from his Ikepod brand, Australian designer Marc Newson introduces the Solaris. Having designed watches since 1986, the expert watchmaker takes a unique approach with his latest creation. Named after an Andrei Tarkovsky film, the Solaris features a duality factor rarely seen on timepieces. Following the concept of an symmetrical two-faced object, this new Ikepod watch combines sleek hand crafted design with two fully reversible faces and German metal-mesh bracelets. Another neat feature is the ability to display two different time zones recto-verso with each face comprised of separate independent movements.

“With the Solaris, however, I wanted to design a very simple, elegant dress watch” - Marc Newson 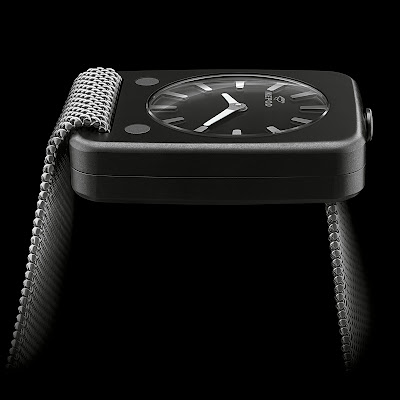 Louise Neri: When did you make your first watch?

Marc Newson: At the age of twelve, in my grandfather’s garage in Sydney. I found a piece of blue Plexiglas, carved it into a funny, massive rectangular shape and bored a big, perfect, cylindrical hole through it with a power tool. Then I inserted a movement that my uncle had given me; or rather he had given me a watch that I promptly took to pieces! I screwed the thick Plexiglas face down with four big woodscrews. They were unique technical experiments, but I remained interested in watches, clipping pages from magazines, learning about all the Swiss brands, and so on.

Louise Neri: What was it about them that interested you so much?

Marc Newson: I was always fascinated by the idea of the watch as a little universe, a container, a time machine that held an enormously complex mechanism with many moving parts, each one perfectly made. It was practically impossible to see what was really going on inside, so they seemed like wonderful, mysterious objects to me.

Louise Neri: Are all watches analog?

Marc Newson: Yes, to some degree. My watches are very handmade and there are very few of them, which is partly why they are inherently valuable. There is no other way to make them, especially not with robots. Watches illustrate a skill set that has neither significantly evolved nor significantly atrophied over the last century, unlike most other artisanal practices.

Louise Neri: When did that happen?

Marc Newson: Pocket watches appeared in the 16th century, and then wristwatches were invented around the turn of the 20th century. Clocks were being miniaturized to the point where they could not get much smaller. Although many other things are being reduced to nano-dimensions, watches reached their limits, having to remain robust, useable and able to be read.

Louise Neri: What else is there for you beyond the practical concerns?

Marc Newson: The idea that you can have time with you wherever you are—that you can literally “take your time”! For me it always seemed like a sort of alchemy, like traveling with a bit of fire in prehistoric times!

Louise Neri: How, over the years, have you chosen which mechanisms to use, given all the available options?

Marc Newson: I’d love to say that on a technical level I make rigorous or considered choices but in reality it’s about what is actually available. The industry has become so consolidated—most of the watch companies are now owned by a handful of big groups—it depends on what you can get your hands on. As Ikepod is one of the few remaining independent companies, it has to wait in line for movements—which is all the more reason for our company to distinguish itself via design. 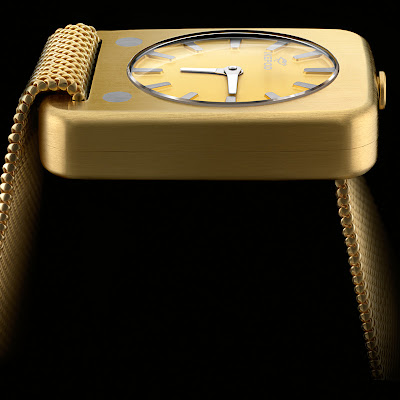 The Ikepod Solaris watch in yellow gold by Marc Newson

Louise Neri: So, would you agree that Ikepod watches are design-driven?

Marc Newson: Absolutely. In fact, most watches are. It’s an interesting parallel with Apple: in the computer industry, the inherent technology is available widely but what differentiates Apple is the design. Of course Apple’s success is due to a lot more than its packaging but what you see and its related functionality is key.

Louise Neri: A lot of your earlier watch designs were more self-consciously concerned with technical function.

Marc Newson: The first Megapode, which is still in production, had an analog flight calculator. It’s my favorite because of its slightly ‘over-technical’ appearance.

Louise Neri: This kind of technical complexity was really fashionable at the time, wasn’t it?

Marc Newson: Yes, I designed the Megapode in the mid-nineties and the huge POD before it, in the mid-eighties. I think that they anticipated the trend of big watches.

In general, I like all the extra things watches can be equipped to “do,” very few of which we actually use or need. A tiny watch movement can be tricked up to the point where it can do half a dozen extra things; it’s like hotting up a car! It’s no wonder that in the industry these extra features are called “complications.” I have been progressively simplifying my watches, but I could easily and happily make them complicated once more.

With the Solaris, however, I wanted to design a very simple, elegant dress watch.

Louise Neri: Why did you call it “Solaris”?

Marc Newson: After Andrei Tarkovsky’s unforgettable film based on the novel by Stanislaw Lem. Solaris suits this watch because it’s all about duality, about being double. I loved the idea of making a symmetrical two-faced object, where one face is visible and the other hidden. It’s always simultaneously up the right way and upside-down. The connection is quite abstract; the original story concerns the relationship between reality and dreams. My Solaris contains two time zones relating to two different places… 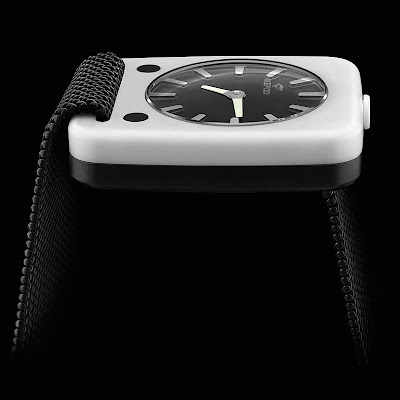 The Ikepod Solaris watch in ceramic by Marc Newson

Louise Neri: Can the wearer choose the time zones?

Marc Newson: Yes, in fact, it’s not just a watch that displays two different time zones recto-verso; it actually comprises two separate movements that are utterly independent of each other.

Louise Neri: How difficult would be to synchronize them perfectly? Or is that part of it, that they will never be completely synchronized?

Marc Newson: Yes, somewhat. I love the idea that there is always that element of slippage.

Marc Newson: In theory, the two movements in the Solaris will keep time because they are highly accurate quartz movements, rather than mechanical movements. But of course they will probably move slightly out of sync over time.

Louise Neri: But given that the watch faces have no second hand, any discrepancy will probably go unnoticed. Can they be reset at will?

Marc Newson: Absolutely, although this is probably at odds with the industry. But given that so many of our clients travel or live between two places, they might well appreciate the idea.

Louise Neri: Is the Solaris a unisex watch?

Marc Newson: Yes, I’ve never really designed for men or women but most of my watches tend to appeal to men because of their scale and weight. Perhaps this is the first of my watches that will appeal as much, if not more, to women.

Louise Neri: The size of the face also relates more to a woman’s watch, although the case is larger.

Marc Newson: However the gold and white gold watches have a masculine presence simply because gold is ultra-dense and heavy.

Louise Neri: Is the same true of the ceramic version?

Marc Newson: Not at all: ceramic is, in order of magnitude, much lighter than gold. Weight is an interesting quality to play with. The weight of a watch is a particular and esoteric thing.

Marc Newson: I also love the fact that mesh is a bit old-fashioned. Mesh is very difficult to find these days and we had to develop this particular variation to make it strong enough yet flexible.

Louise Neri: It makes me think of jewelry trends in the twenties and thirties; also of Elsa Peretti’s mesh chains for Tiffany…

Marc Newson: Sure, but in this case there are some technical limitations and real structural issues to deal with, such as the fact that the strap has to be strong enough to hold the watch in place on the wrist.

Louise Neri: How is the mesh produced?

Marc Newson: The production of metal mesh is another complex and specialized micro-industry. Much of it requires hand finishing. We work with a German company that makes mesh and chains for many different industries and a host of industrial applications, as well as for the textile industry. Companies such as this one use metals and industrial materials in such a forgiving and seductive way. So I was determined to work with them for the Solaris.

Related Posts at The Watchismo Times

Ikepod Black Hole In the Light